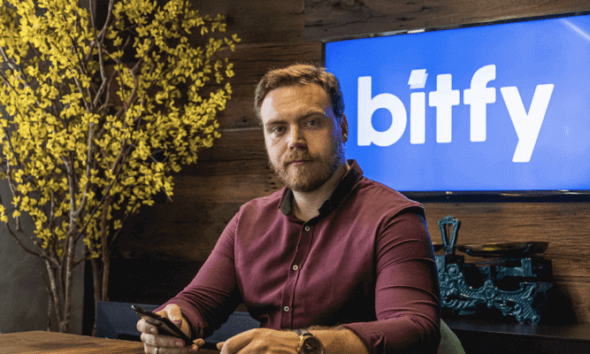 The round was led by investment fund Borderless Capital

Bitfy lands series A investment. The startup that offers a multipurpose portfolio for cryptocurrency custody in Brazil announced on Thursday (16) that it has raised $2,5million in a Series A round led by blockchain venture capital firm Borderless Capital joined by Algorand and Dash Investment Foundation, as well as American and Brazilian angel investors.

With the money, the startup founded by Lucas Schoch (picture) will invest in new technologies, hire more employees and deploy initiatives to increase its customer base. Another landing place of the capital will be in Bifty’s positioning as a reference brand on a mobile platform for cryptocurrency transactions, the company told the press.

The company expects to triple its customer base by the end of 2022 and transact at least $100 million which is still a modest number for the market. But the startup’s unique software platform (see below) may generate the traction to overtake its competitors.

Bitfy emerged in 2019 to be a wallet for simpler and safer cryptocurrency use, that is to facilitate the buying and selling of cryptocurrencies. The platform, however, does not compete with brokerages or exchanges, as it is not a platform for traders.

Although Bitfy operates buying and selling cryptocurrencies with its technology, the startup‘s focus is not on generating speculation on top of these transactions. According to Schoch, the main goal of the wallet is to bring security and a better user experience to the investor who wants to own cryptocurrency but is not a trader.

Currently, the platform operates with eight cryptocurrencies and will announce two more in the coming days. According to the CEO Lucas Schoch, Bitfy is expected to announce at least one new coin every month by 2022.

A new blockchain model backs Bitfy landing of its series A

As Bitfy lands its series A finance, the company is poised to grab substantial market share in the bitcoin Fintech space specially because the company’s model allows for the blockchain keys to remain with the user and has the technological possibility to interact even with credit cards.

Malta Neto Advogados is a law firm based in São Paulo, Brazil.

Borderless Capital has been advised on the deal by its internal legal team.