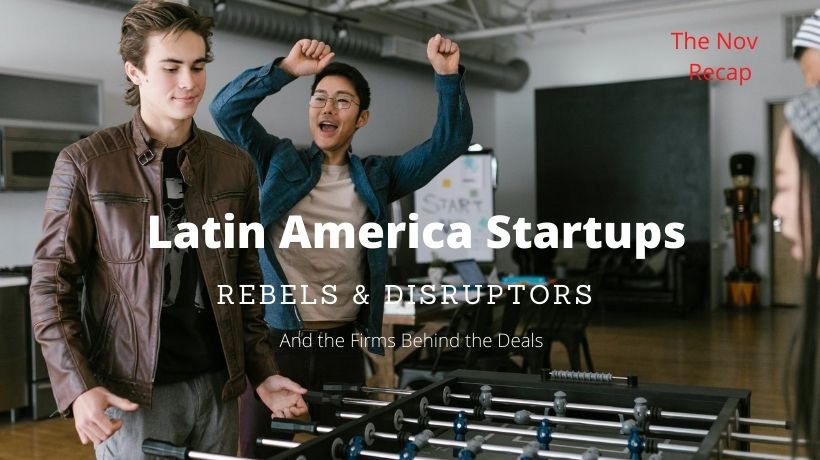 Brazil leads both in funding raised and number of rounds, shows the Sling Hub’s report

Latin America stands out in November’s M&A and Venture Capital activities with bigger checks and strategic acquisitions across the board.

Latin American startups transcended $1 billion in investments per month since February. In comparison with 2020 this mark was surpassed only in September. The data is from the Startup Activity Report, issued by the Brazilian intelligence platform Sling Hub and reported by journalist Carolina Pompeo.

Brazil once again stood out in number and size of deals closed. With massive venture capital dollars entering the region, Brazil secured 70% of the total volume tapped in November, or $988 million. The country also concentrated the vast majority of the mergers and acquisitions for the month.

In a recent interview aired on CNN CEO of EBANX, João Del Valle, told anchor and correspondent Julia Chatterley that he forecasts a 30% growth per year until 2025 in Latin America, the region with the highest e-commerce growth in the world.

SafeSpace, a digital misconduct in the workplace whistleblower platform topped seed- investment in women-led startup in Brazil and raised BRL $11 million in a seed round that called the market’s attention considering the objective of the platform.

BeerOrCoffee completed its series A round of investment from Kaszek and Valor Capital. BeerOrCoffee is a B2B marketplace of workspaces on demand that aims at providing hybrid work solutions for companies. It offers over 1,100 shared workspaces in 160 Brazilian cities.

Gringo landed its Series A investment led by Kaszek and co-led by GFC Capital and ONEVC. The company provides a digital platform to help Brazilians navigate the complexity of the country’s rules for documentation of vehicles, taxes and fines, and it also provides financial services to allow customers to finance those costs.

Most recently, Facily closed on a $250 million Series D that was led by DX Ventures and Berlin-based Delivery Hero, with Citius as co-anchor investor. It has raised over $360 million across several rounds this year and it is now valued at $850 million.

Brazilian startup Isaac, which develops solutions for the financial management of private schools, raised $125 million in a Series B round led by General Atlantic. Also signing the funding round were SoftBank Latin America Fund and venture capital firm Kaszek.

Nubank acquired Olivia, a tech and artificial intelligence (AI) startup that helps users plan their expenses and save money. With this acquisition, Nubank will integrate Olivia’s platform and services into their application as well as merge the two companies’ teams together.

BR Partners acquired a minority holdings in PetCamp for approximately $20 million and entered into the billion-dollar Brazilian pet market.

Semantix, a São Paulo-based software maker, plans on going public after merging with SPAC Alpha Capital. The deal is expected to give Semantix an equity value of about $1 billion and allow it to pursue acquisitions and global expansion.

Divi-hub, a startup with a trading platform focused on the social creative media economy and the influencers, made the headlines after receiving the go ahead from Brazil’s SEC (CVM) for the company’s “Operation Metaphorando” intended to raise BRL $4.7 million for a reality show on body language inspired by the game Among Us.

The announcement, which was reported by Beyond the Law.News, generated a tremendous response in its site and social media with over 19.5000+ views on LinkedIn alone.

The Firms Behind the Deals

U.S-based law firms Foley & Lardner, Wilson Sonsini, Gunderson Dettmer and Morrison Foerster were the firms most active in Latin America venture capital and mergers and acquisitions for the month.

Foley topped the ranks for November in the number of deals advised by the firm in Brazil. Since it brought in June from DLA Piper Latin America specialist partner André Thiollier, the firm’s deals in the region shot up by staggering numbers, specially in Brazil.

Thiollier joined a highly specialized team focused on merger & acquisitions, capital markets, and venture capital brought this year by the Am Law 50 Foley & Lardner to its Palo Alto and San Francisco offices. The team included 15 partners, counsels, attorneys and paralegals.

Thiollier led his firm’s deal team in the majority of the transactions in the region.

In most of the deals Gunderson Dettmer and Wilson Sonsini were in opposite sides to Foley’s either acting as counsels to the investors or to the companies.

Gunderson’s partner Daniel Green (picture below) and Wilson Sonsini’s partner Matt Squires headed most of their firm’s deal teams in the region.

November also brought newcomers to the top of the list of the most active Brazilian law firms in the technology emerging growth space in Brazil.

Bronstein Zilberberg Chueri Potenza Advogados took the number one spot on the list of the most active M&A and venture capital law firms in November.

Bronstein Zilberberg was founded in 2021 by partners highly specialized in the field coming from the finest and traditional law firms of Brazil.

The firm today is greatly recognized as one of the top M&A Venture Capital law firms in the country.

The top rankings also included in November the São Paulo based KLA Advogados and Lefosse Advogados.

Of course the traditional powerhouses Machado Meyer, Pinheiro Neto Advogados and Mattos Filho are top-tier on the list.

Legal 500 Mexican firms Creel, García-Cuéllar, Aiza y Enríquez, S.C. and Galicia Abogados S.C were the most active firms in the space for the month in Mexico.